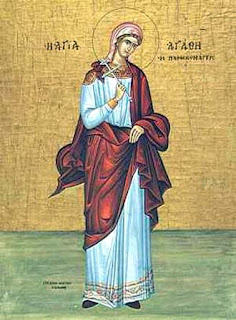 Saint Agatha of Palermo-Sicily (died traditionally 251) is a Christian saint. Her memorial is on 5 February. Agatha was born at , and she was martyred in approximately 251. She is one of seven women, excluding the Blessed Virgin Mary, commemorated by name in the Canon of the
She is the patron saint of ; she is also the patron of martyrs, wet nurses, fire, earthquakes, and eruptions of and women who are in danger

The Holy Virgin Martyr Agatha was the fifteen-year-old daughter of rich and respected Christian parents from the city of in . During the persecutions of Christians under Emperor Decius, the city prefect of by the name of Quintianus, having heard about Agatha’s wealth and beauty, sent his soldiers after her to bring her to trial.
At , St. Agatha was housed with a certain rich woman, who had five daughters. They all attempted to tempt St. Agatha with fine clothes, amusements and entertainment, urging her to offer sacrifice to the pagan gods, but the saint disdained all these things. The more they tried to move her, the more resolute she became. She prayed that she might soon face martyrdom.
During her interrogation under Quintianus, the holy martyr was swayed neither by flattery nor threats, and was subjected to cruel torments. They tried to remove her breasts with metal tongs, and when this failed, used knives.
The holy Apostle Peter appeared to her in prison and healed her wounds. St. Agatha was led to be tortured again, and Quintianus was astonished to see her completely healed.
The tortures began once more, but an earthquake took place in the city at that moment, and many buildings were destroyed. Among those killed were two of Quintianus’s advisors. The terrified inhabitants of the city rushed to Quintianus, demanding an end to Agatha’s tortures. Fearing a revolt by the people, Quintianus sent St. Agatha to prison. There the martyr, offering thanks to God, peacefully surrendered her soul to the Lord
Troparion (Tone 4) :
Your lamb Agatha, calls out to You, O Jesus, in a loud voice:
“I love You, my Bridegroom, Bridegroom, and in seeking You I endure endure suffering.
In baptism I was crucified so that I might reign in You, and I died so that I might live with You.
Accept me as a pure sacrifice,
for I have offered myself in love.”
Through her prayers save our souls, since You are merciful.