Explanation of the Orthodox Liturgy

Liturgy /1- the Cover of the sacred Utensils 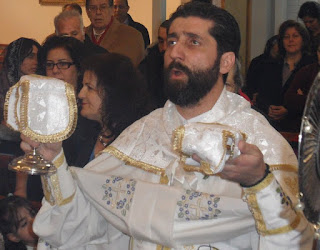 Cover of the sacred Utensils which the priest puts on his shoulders during the sacrifices cycle.
It is often an embroidered cloth placed over the cup and the Chinese when they are on the altar, or on the table.
The first function of cover is to protect Utensils from dust and insects,
By the time it became a symbol of the existence of angels between us during the Divine Liturgy. “Representatives cherubim secret ..." Chorus chanting that during the great entry where it refer to participants of the believers in the liturgy.
A priest conceal his shoulders at the great cycle “sacrifices cycle” or to convey sacrifices from the altar to the table and covers the pots “the cup, Chinese" with special cover made of cloth, 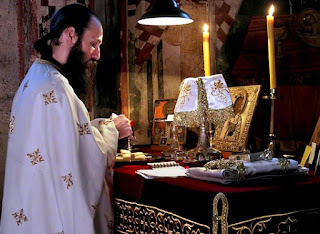 In the past, when a priest was declares in the liturgy “the doors, the doors ...." The deacons "sub-deacons" are rushing to close the doors of the church after confirmation of the external exit catechumens, who did not baptized yet, are not entitled to them as that participate in the Holy Communion.
At the same time, the curtains came down, which hide the priests behind the table, where bowed the knee during the reading of words sanctification. Thus to understand the words of St. John Chrysostom: "When the curtains came down the sky to be open."
Today, during the reading of the Constitution of the faith "the Creed”, Priest drives the Cover over the sacrifices,
When the bishop serves the liturgy, the priests drive the Cover over his head