The document  refer that 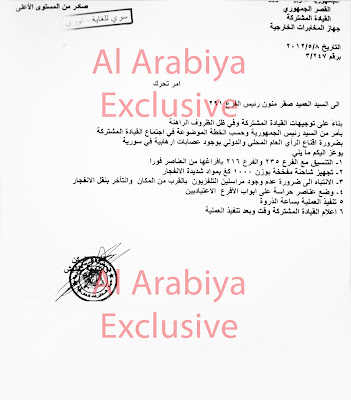 
To Brigadier General  Saqr Menon the Chief of Branch 291.


At the direction of the joint command, according to the current circumstances.


By order of the President of the Republic, and according to the plan issued at a meeting of the Joint Command.


Instructs you the following:


1- coordination with branches 235 and 216 and make it empty from soldiers.


3- take attention that there is no TV reporter, and delay broadcasting the event.


4- put guard at the gates of branches.


6- Inform the command at the time and after the implementation.


* The source of the Arabic's document is Al Arabiya TV