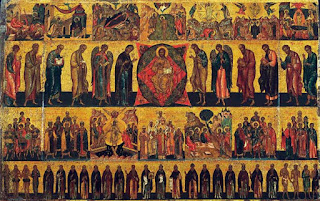 The concept of the intercession of the saints

It is important for us to begin this research through study the texts of the holy bible,


which lead us to the true, that because we are Christians and our fundamental sources come from the bible.


For that, we will refer direct to the texts that indicated to the subject of our research “the intercession”.


And when he had taken the book, the four beasts and twenty four elders fell down before the Lamb,


having every one of them harps, and golden vials full of odors, which are the prayers of saints. (Rev 5:8)

2:1 I exhort therefore, that, first of all, supplications, prayers, intercessions, and giving of thanks,


be made for all men;


2:2 for kings and for all that are in authority; that we may lead a quiet and peaceable life in all

2:3 for this is good and acceptable in the sight of God our Savior;


8:3 And another angel came and stood at the altar, having a golden censer;


and there was given unto him much incense, that he should offer it with


the prayers of all saints upon the golden altar which was before the throne.

8:4 And the smoke of the incense, which came with the prayers of the saints, ascended up


There is a big question come from the people

How God accept the prayers of the saints who are dead?

Saints who moved from this life are not dead, So the lord Jesus Christ had said:

20:36 Neither can they die any more: for they are equal unto the angels; and are the children of God,


being the children of the resurrection.

20:37 Now that the dead are raised, even Moses showed at the bush, when he called the Lord


And to confirmation that “Neither can they die any more: for they are equal unto the angels” so we refer to the Transfiguration on the mount


9:29 And as he prayed, the fashion of his countenance was altered, and his raiment was white and glistering.


9:30 And, behold, there talked with him two men, which were Moses and Elias:


9:31 Who appeared in glory, and spoke of his decease which he should accomplish at .


9:32 But Peter and they that were with him were heavy with sleep: and when they were awake, they saw his glory, and the two men that stood with him.


In a short conclusion and summary


In the Transfiguration on the mount, we see Moses and Elijah still alive and they had appeared in glory on the earth, weared like angels.


This was confirmed categorically that the saints are not dead, but they are living in the glory of God, and it was also confirmation about what has wrote in the Revelation about the prayers and intercessions of the saints that they are giving before the throne of God.