The Appearance of the Cross Near Athens in 1925 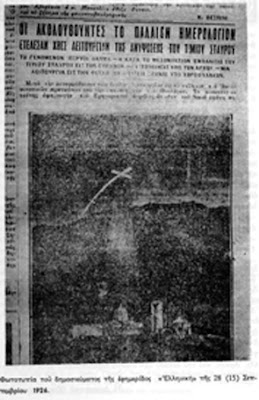 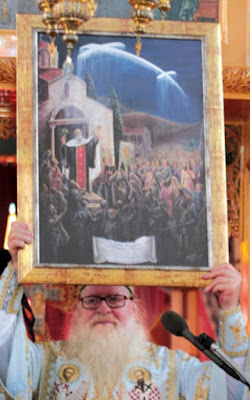 The Appearance of the Cross Near Athens in 1925

In the early 1900's and especially in the 1920's -- as still today -- there were strong anti-Church and secularist forces in power in Greece and in the Ecumenical Patriarchate. Among the actions of these powers was the forcible introduction of the Gregorian Calendar. The Gregorian Calendar is adequate for functions of business, the stock exchange, and other worldly, secular activities. Liturgically, however, it is practically useless, and even harmful. It is no way possible to reconcile the Gregorian Calendar with the canonical Orthodox Christian Paschalion--the determination, in accordance with the decrees of the First Ecumenical Council, of the date of Pascha, the Feast of Feasts. Moreover, the introduction of a Church calendar change by a local church created an unacceptable liturgical disunity within the Church itself.
Vast numbers of the people of Greece refused to accept these anti-canonical, anti-Church modernisms which were being forced upon them by state police power. The upholders of Tradition suffered - and continue to suffer - persecution, imprisonment, and deprivation at the hands of secular police powers. But the spiritual eyes of the true Orthodox Christians saw clearly even if, at the time, they did not completely comprehend the evil of the new calendar. It was a forerunner and a sign of the greatest heresy in the history of the world - Ecumenism. Many people, however, became confused. Some began to waiver. Just as the Arians were in control of the worldly power in 351 and were able for a whole to force their heresy upon the empire, so at this time, the calendar renovations controlled the worldly power of Greece. In such a troubled and dangerous time, the All-Merciful God heeded the needs of His people.
Again, as in 351, God sent a wondrous apparition of the sign of the All-Honorable Cross to seal the truth and put the false teachers to shame. The appearance of the Precious Cross in 351, took place during the time of St. Cyril was patriarch in Jerusalem. The Cross reached from Golgotha to the Mount of Olives, and was almost two miles in length. This miraculous sign remained in the sky over the Holy City for a week.
See "The Wondrous Apparition of the Sign of the All-Honorable Cross Over Jerusalem in 351 AD, Orthodox Life, Vol. 22, No. 2 (March-April 1972), pp. 13-17.

This appearance of the sign of the Cross took place in this manner:
In 1925, on the eve of the feast of the Exaltation of the All-Honorable and Life-giving Cross of our Savior, 14 September according to the Orthodox Church calendar, the All-night Vigil was served at the Church of St. John the Theologian in suburban Athens. By nine o'clock that evening, more that two thousand of the true-Orthodox faithful had gathered in and around the church for the service, since only a few true-Orthodox churches had been unwittingly left open by the civil authorities - most had been closed. Such a large gathering of the people could not, however, go unnoticed by the authorities. Around 11PM the authorities dispatched a battalion of police to the church "to prevent any disorders which might arise from such a large gathering." The gathering was too large for the police to take any direct action or arrest the priest at that time, so they joined the crowd of worshippers in the already overflowing courtyard of the Church.
Then, regardless of the true motives for their presence and against their own will but according to the Will, which exceeds all human power, they became participants in the miraculous experience of the crowd of believers.
At 11:30PM, there began to appear in the heavens above the church, to the northeast, a bright, radiant Cross of light. It illuminated not only the church and the faithful but, in its rays, the stars of the clear, cloudless sky paled and the churchyard was filled with an almost tangible light. The form of the Cross itself was an especially dense light which could be clearly seen as a Byzantine cross with a crossbar toward the bottom. This heavenly miracle lasted for half an hour, until midnight, and then the Cross began to rise vertically, as the cross in the hands of the priest does in the ceremony of the elevation of the Cross in church. Having come straight up, the Cross began gradually to fade away.
Human language is not adequate to convey what took place during the apparition. The entire crowd fell prostate upon the ground with tears and began to sign prayers, praising the Lord with one heart and one mouth. The police were among those who wept, suddenly discovering, in the depths of their hearts, a childlike faith. The crowd of believers and the battalion of police were transformed into one united flock of faithful. All were seized with a holy ecstasy.
The vigil continued until 4:00AM, when this human torrent steamed back into the city, carrying the news of the miracle because of which they were still trembling and weeping.
Many of the unbelievers, sophists and renovationists, realizing their sin and guilt, but unwilling to repent, tried by every means to explain away or deny this miracle. But the fact that the form of the cross had been so sharply and clearly defined as that of the Byzantine Cross, with a crossbar at the bottom for a foot-rest, completely negated any attempt to explain away as an accidental physical phenomenon.
The fact that such an apparition of the Cross had also occurred during the height of the first great heresy must strike the Orthodox with an especial sense of the magnitude of the importance of the calendar question and of all that is connected with it. No sensible person can discuss this issue lightly, with secular reasoning or with worldly arguments. Renovationists, like the Arians in 351, are left without extenuation or mitigation.
Reprinted from Orthodox Life, Vol. 22, No. 2 (March-April, 1972), pp. 18-20.
"I Too Was There" Eyewitness Accounts of the Appearance of the Cross over the Church of St. John the Theologian at Mt. Hymettus, September 14, 1925.
I was one of the men from the Police Institute who were sent to stop the vigil that night, some fifty years ago, at the country Church of St. John the Theologian.
The Old Calendarists were keeping vigil there, because it was the eve of the feast of the Exaltation of the Precious Cross (according to the Church Calendar, not the papist! -ed.)
Since many people had gathered - more than two thousand individuals - we did not attempt to seize the priest as we had been ordered, but we sat down quietly in the nearby court and waited for them to finish.
At about 11:30 at night, we heard a loud and strange uproar coming from the shouts of the multitude. Without any delay, we ran to see what was happening - and we saw. The whole multitude of the faithful was in a state of excitement. Some were weeping and others, crying out "Lord, have mercy," were kneeling and had turned their eyes toward heaven, and yet others were fainting, overwhelmed with great emotion. Then we too looked and beheld the marvel: an enormous radian Cross, very high above the church was illumining the whole area. At first, we were seized with fear, but immediately we came to ourselves and, forgetting the purpose for which we had been sent, we fell to our knees and wept like little children.
Of course, it is superfluous for me to tell you that, filled with emotion, we attended the rest of the vigil to the end - no longer as persecutors but as faithful Christians. In the morning when we returned to the Institute, we told everyone about the great marvel that we had been deemed worthy to see. Afterwards there was an investigation and all of us swore under oath that we had seen the Precious Cross clearly, high in the sky.


On that night in 1925, when the Precious Cross appeared, I was making the last run with the tram, which I was operating. I had reached Omonoia and was going around the square when I saw everyone looking up toward heaven and crying, "Look! - the Cross! - the Cross!" Immediately I stepped on the brakes and stopped the vehicle. I stuck my head out the tram's door and I, the unworthy one, also saw the Precious Cross of Our Lord - may His Name be glorified; it was shining over Mount Hymettus. I don't remember how long this lasted. I know only one thing - the Precious Cross which I saw the night turned me into a different man. Since then, everyone in my family has become a faithful child of the Church of the True Orthodox Christians.